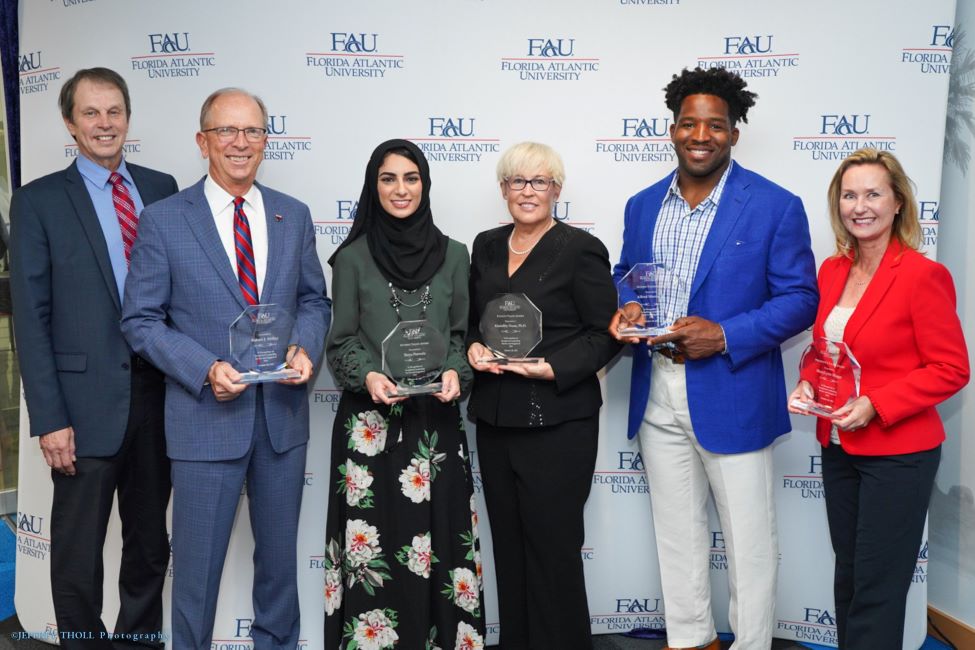 Florida Atlantic University recently hosted its annual Talon Leadership Awards ceremony as part of Homecoming 2021. The awards recognize outstanding faculty, student, alumni and community leadership. Co-sponsored by the FAU Alumni Association (FAUAA) and the Homecoming Committee, the Talon Awards have been presented during Homecoming week since 1997.

“The Talon Awards give us the opportunity to thank the people who have made an extraordinary impact on the university and the FAU community,” said FAU President John Kelly. “I am extremely grateful for each one of these individuals and the contributions they’ve made, and I am honored to shine a spotlight on their service.”

The President’s Talon Award went to the former Florida House Speaker Pro Tempore MaryLynn Magar and former FAU Trustee Robert (Bob) Stilley. Rep. Magar worked to help create a thriving scientific hub at FAU’s John D. MacArthur Campus in Jupiter. She successfully fought for numerous initiatives that allowed FAU and the Max Planck Florida Institute for Neuroscience to grow together as partners. Her leadership and understanding FAU’s role in the region coincided with more than $70 million in state appropriations.

Her husband, Bob, also championed FAU, especially the Jupiter campus, through his service on the university’s Board of Trustees from 2006 to 2021. During his tenure as chairman of the Board, he earmarked critical funding for the Jupiter campus, specifically for FAU’s Life Science Initiative.

Kim Dunn, Ph.D., received the Faculty Talon Award. She is an associate professor in the School of Accounting and faculty senate president. She was the first director of FAU’s Accounting Scholars Program, which has achieved 100 percent job placement for its graduates since its inception. In 2018, Dunn founded Champions Empowering Champions, a nonprofit organization working to invest time and resources in college students that have experienced foster care or homelessness.

The Student Talon Award was presented to Tanya Panwala, a third-year student in the Charles E. Schmidt College of Medicine. Tanya has always been interested in addressing health disparities and advocating for underserved communities, which led to her interest in medicine. She co-directed the Bridge to Medicine program and created a formal mentoring program for high school students interested in pursuing medicine. Additionally, she serves as a student representative on the Palm Beach County Medical Society’s Council on Medical Education.

Two-time NFL Pro Bowler Alfred Morris received the Alumni Talon Award. Alfred rushed for 3,829 yards and scored 27 touchdowns during his time at FAU. He was drafted by the Washington Redskins in 2012. That year, he set records for rushing yards in a single season and most touchdowns scored by a rookie in a single season. Over the course of nine professional seasons with four teams, he accumulated 6,173 rushing yards and 35 touchdowns.

For more information about the Talon Awards and the FAU Alumni Association, visit faualumni.org.