“Believe in yourself. I’ve taken some risks and had some failures. Never give up and stick to your dream” 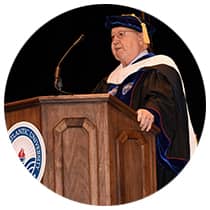 The Florida Atlantic University Foundation is mourning the loss of Robert (Bobby) Campbell, 82, a limitless leader in business, education and a true champion for children.

The son of a single parent, he had a scholarship to attend college, but couldn’t afford to go. He spent the rest of his life creating opportunities for others.

In 2016, Bobby and his wife Barbara buoyed FAU’s pioneering Schmidt Family Complex for Academic and Athletic Excellence with a $5 million gift to name the eponymous Academic Success Center in 2016. The Campbells’ Center provides student-athletes with a comprehensive academic support program, which includes tutors, career guidance, computing resources, and study space for FAU students who participate in our athletics programs.

In addition to the $5 million gift, the Campbells have supported the annual Keeping Memories Alive Walk, benefitting the Louis and Anne Green Memory & Wellness Center (MWC) at the FAU Christine E. Lynn College of Nursing, through donations and a large team of walkers for many years. They gave to the MWC’s Caring Hearts Auxiliary and supported the FAU President’s Gala.

In 2017, FAU awarded Bobby an honorary doctorate for both his dedication to FAU students as well as his outstanding achievements in his field. At the commencement ceremony, he shared the story of his rise from a stock boy at Kinney Shoe Company to the founder and CEO of BBC International, a behemoth in children’s and athletic footwear design. He urged the graduates to maintain a positive attitude — no matter what life throws at you.

“Believe in yourself. I’ve taken some risks and had some failures. Never give up and stick to your dream,” he said. Inspired, the graduates gave him a standing ovation.

“Bobby was a visionary philanthropist, a steadfast advocate and a wonderful friend,” said Stewart Martin, chair of the FAU Foundation Board. “He made an indelible impact on our FAU Family and his legacy of leadership will live on in the students he championed.”