Broadening Perspectives Outside the Classroom

“Oscar and I believe that you learn when you travel. It’s important for architecture students to broaden their education by observing and experiencing design and cultures around the world.” 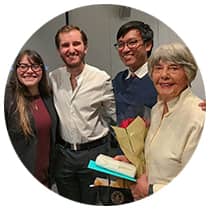 VISION: To broaden architecture students’ education and worldview by helping them experience design and cultures both domestic and abroad.

Kitty Vagi was a 20-year old university student in Hungary when she married her husband, Oscar. Shortly after, the communist regime took over and the couple were forced to flee. Settling in Fort Lauderdale, Oscar started his own architecture firm and served as an adjunct professor at FAU, teaching design studio.

As a tribute to her late husband, Kitty established the Oscar Vagi Traveling Endowed Fellowship Fund, which enables FAU architecture students to take part in a travel program to enhance their studies. Since its inception, the fund has supported nearly 50 students, who’ve traveled to places such as Thailand, the Netherlands, the Balkans and Washington, D.C.

“Studying the Bauhaus style of design where the movement began was amazing,” said Andrea Steffen, who studied in Germany as a 2008 Vagi Fellow. “My designs are better as a result of this program. And meeting kids from all over the world was eye-opening.”