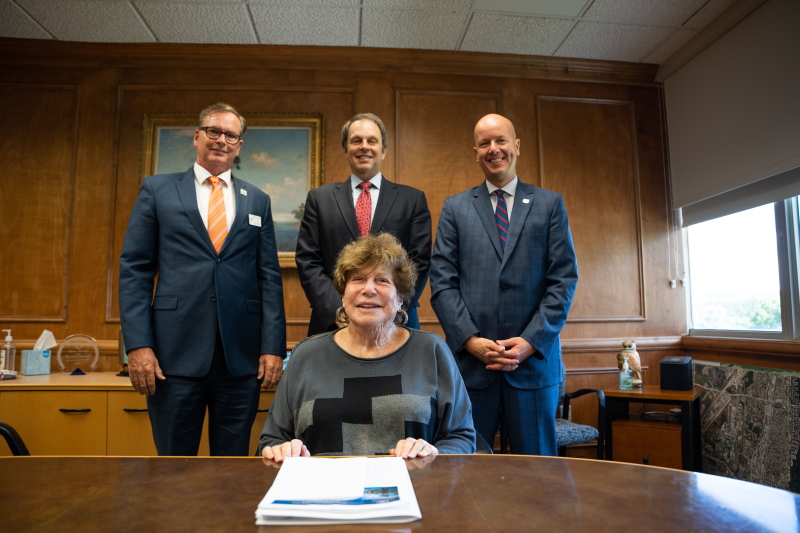 "I understand the importance of FAU to our greater community,” Larkin said. “I want to ensure young people are given every opportunity to be successful and attend college regardless of their humble beginnings.”

This generous scholarship support is in addition to a $617,000 gift from Larkin to construct and name the Alan B. and Charna Larkin American Presidential Study on the third floor of the S.E. Wimberly Library at FAU’s Boca Raton campus. The premier space will house the Alan B. and Charna Larkin American Presidential Letters Distinguished Collection, making the letters available to the larger university and the general community. Among the items that will be housed in the presidential study are 45 letters signed by American presidents ranging from George Washington to Donald Trump.

This distinctive space also will serve as a historical archive of the Alan B. and Charna Larkin Symposium on the American Presidency, as well as a student study and gathering space, an educational site on the American presidents, and a community engagement location for small lectures, receptions and other special programs.

"This gift reflects the generosity of the Larkin family and their commitment to making an impact on the lives of our students and community, as well as improving access to important historical information,” said FAU President John Kelly. “This gift will give for generations to come.”

Additionally, the gift supports a collaboration between the S.E. Wimberly Library and the Dorothy F. Schmidt College of Arts and Letters. The Larkin Study will include a digital component that will provide links to all presidential libraries and homesteads, as well as a platform for digital history students to develop exhibits using art, photos and documents to feature a particular presidential era.

"The Alan B. and Charna Larkin American Presidential Study reflects the evolving vision of the modern academic library and the transformation of library spaces to meet the needs of today’s students,” said Christopher Delisio, FAU vice president for Institutional Advancement and CEO of the FAU Foundation. “This generous philanthropic gift builds upon our history and legacy of community collaboration to advance knowledge that helps us all.”

FAU began its relationship with the Larkin family in 2007 when Charna Larkin, along with her family, made a $1 million donation to FAU in honor of the late Alan B. Larkin to establish an endowment to fund an annual symposium on the American presidency. The Alan B. and Charna Larkin Symposium on the American Presidency provides up to three distinguished scholars each year with the opportunity to present papers that may be contributed to books, scholarly journals, essays and other publications. The fund also supports graduate fellowships and undergraduate scholarships for students in the Dorothy F. Schmidt College of Arts and Letters who demonstrate an interest in the American presidency.

“We are so grateful for these two generous gifts, the presidential study and the scholarship endowment,” said Michael J. Horswell, Ph.D., dean of the Dorothy F. Schmidt College of Arts and Letters. “Charna’s philanthropic vision elevates the profile of our college and university while providing students unique access to the historical record of the American presidency and to the financial support to pursue their studies at FAU in the arts, humanities and social sciences.”